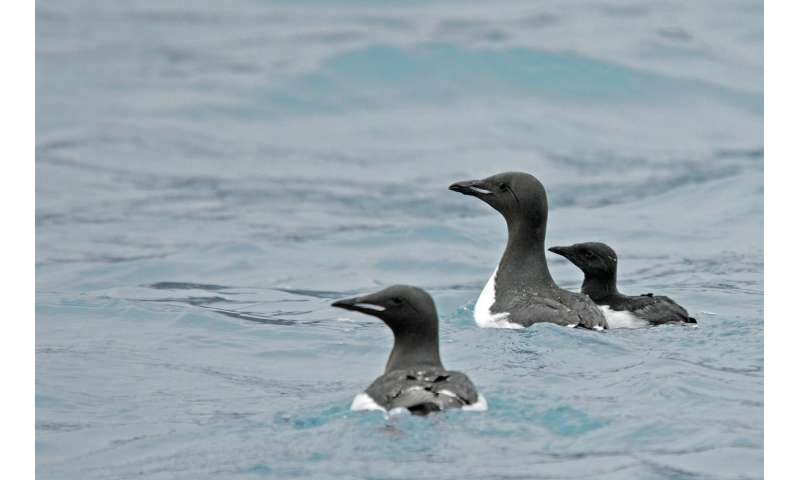 (Aarhus University, Physorg; 24 March 2017)
It looks like a spooky suicide when small, fluffy guillemot chicks leap from the cliffs and fall several hundred metres towards the sea – long before they are fully fledged. But researchers have now discovered that there is good reason behind this seeming madness.

And you ask yourself why when you on a calm Arctic night watch the spectacular sight of dozens of young guillemots who leave their safe nests and flutter past the towering cliffs into nothingness.

What is it that drives these young birds into something that to the eye seems an impossible survival strategy for the species?

Food deep in the ocean

Researchers from, among others, Aarhus University, Denmark and Greenland Institute of Natural Resources, Greenland, have now discovered that there is good reason behind this seeming madness. They mounted small electronic loggers on the legs of a number of birds and recorded the birds’ flight and diving behaviour in detail.

The guillemot (or thick-billed murre) is a seabird with a long life span. The female lays only one egg and thus has no more than one chick per year. Guillemots nest on cliffs in the Arctic, often in very large colonies with up to hundreds of thousands of birds—including Saunders Island, Thule, Greenland, where researchers have now studied their behaviour.

The arctic summer is short and females must quickly produce an egg. After the chick is hatched and is still in the nest, both the mother and the father bring it food, which consists of small fish.

The small electronic dataloggers revealed that guillemots can dive very deep to find food—down to about 200 m. This is deeper than for any other flying bird.

Males ensure the growth of their offspring

The distance from good fishing spots to the colony may be long, and in late summer the female is exhausted. This is when the male steps into character and guides his offspring to the sea and the indispensable pantry. And the male stays with his offspring for five to seven weeks at sea.

“Our measurements show that the male feeds the chick twice as much as both parents could if the chick remained in the colony.