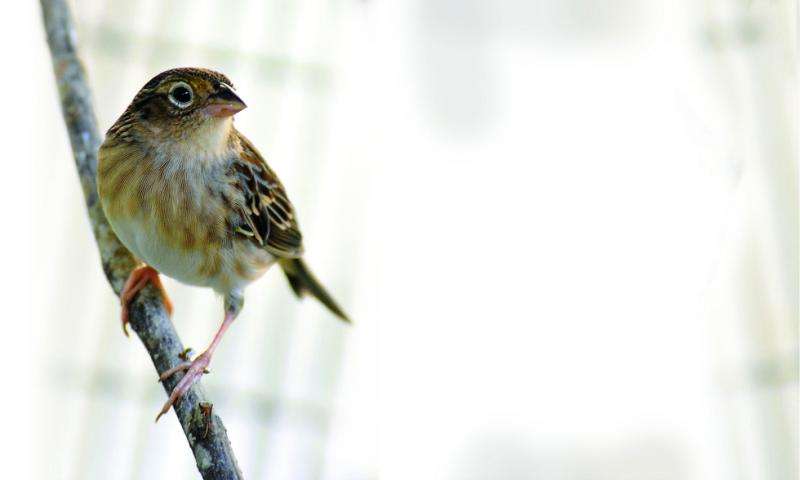 These tiny songbirds bask in the breezes that flow through their custom enclosure. They know the nesting season is near. Named for their song, which resembles the sounds of grasshoppers, the sparrows are blissfully unaware that they are among the last of their kind. These birds share the property with a motley crew of endangered wildlife. There are the east African bongo antelopes, living far from the poachers and habitat destruction that have pushed their species to the brink of extinction. Golden lion tamarins can be seen across the way, part of a 40-year breeding program that has helped restore the species in the forests of Brazil. Large birds and tiny primates make up the rest of the residents of the property. They are part of a broad initiative in the Tropical Conservation Institute (TCI), a collaboration between FIU and the Rare Species Conservatory Foundation (RSCF).

The Florida grasshopper sparrows are the newest addition to the RSCF property. Less than 60 breeding pairs remain in the wild today, according to Karl Miller with the Florida Fish and Wildlife Conservation Commission. Some say it could be fewer than 25. At about an ounce, the bird’s tiny size makes it difficult to find. Their cryptic coloring of brown feathers with flecks of gray works like camouflage. They’re also very elusive, so keeping tabs on them is difficult. Yet, scientists know it is one of the most imperiled birds on the planet. FIU conservationist Paul Reillo is more blunt.

“This bird is going to go extinct in the wild. There’s no question about that.”

Reillo is the director of TCI and founder of RSCF. For 35 years, the biologist has fought to save species through field-based conservation and, when necessary, captive-breeding programs. The team of researchers that make up TCI is working across the world to protect and restore populations of birds, land animals and marine species. The institute has received core funding support from the Batchelor Foundation to help sustain its programs. Nearly every species the researchers are working with are fighting for survival. Many are winning.

In the 1980s, populations of the red-browed Amazon parrot were falling to desperately low numbers. The species, with its distinctive green feathers and striking red crown, appeared to be headed for extinction, nothing more than a footnote in the history of the planet’s biodiversity. Reillo and the RSCF team gave captive breeding a try.

They started with 11 birds. Today, nearly 30 years later, the red-brow’s numbers have grown to nearly 100 in captivity, and are making a comeback in the wild. Reillo thinks the same could happen for the Florida grasshopper sparrow.

“It’s a species on life support,” he said. “We need to pull out all the stops this year. There is definitely optimism around here, but this bird is facing its end. It’s scary.”

The Florida grasshopper sparrow has been listed as an endangered species since 1986. It is not a migratory bird and historically was only known to nest in the dry prairie grasses of central and southern Florida. As much as 90 percent of the sparrow’s natural habitat has been developed, and today there is only one area left in the wild where the sparrows are known to reside—a swath of land not far from Walt Disney World. The sparrow population in that area has experienced a brutal decline in the past five years.

In 2015, seven young hatchlings, some abandoned and the rest from nests expected to fail, were put into the care of Reillo and his team—the first time the species was brought into captivity. Reillo was expecting a slow start, but the captive clutch shocked everyone when two birds mated and produced four hatchlings in the first year. The team had little time to celebrate because, soon after, heavy rains flooded the prairie. State and federal wildlife officials recovered as many eggs as they could and brought those to Reillo for incubation and rearing.

“This little bird is doing everything to stay on planet Earth, but the odds are against it,” Reillo said. “We have problems on every front. Financial. Disease. Habitat.”

When asked if the Florida grasshopper sparrow can elude extinction, Reillo doesn’t have an answer. But with so few left on the planet, he says captive breeding is the difference between this bird being here and not.

Sandra Sneckenberger, an endangered species recovery biologist with the U.S. Fish and Wildlife Service, says the Florida grasshopper sparrow is a tough species to take on. Few were willing to be involved in a captive breeding program, she said, but federal officials knew Reillo and his team could give the sparrow a fighting chance.

The species presents unique challenges for scientists. The bird’s size makes it difficult to handle and nearly impossible to examine. No long-term captive-breeding program exists for similar sparrow species, so the team has no template to follow. Little is known about their immunity or to what diseases they are susceptible. Scientists often recover remains of animals to investigate cause of death and determine if populations suffer from parasitic diseases, bacterial infections or other illnesses. But just as their size and secretive nature make them difficult to locate while alive, it’s nearly impossible to find the bodies of Florida grasshopper sparrows when they die. Since first being placed into captivity, a few were discovered to be carriers of a disease from the wild population.