China is one of the countries with abundant waterbird diversity. Over the past decades, China’s waterbirds have suffered increasing threats from direct and indirect human activities. It is important to clarify the population trends of and threats to waterbirds as well as to put forward conservation recommendations.

We collected data of population trends of a total of 260 waterbird species in China from Wetlands International database. We calculated the number of species with increasing, declining, stable, and unknown trends. We collected threatened levels of waterbirds from the Red List of China’s Vertebrates (2016), which was compiled according to the IUCN criteria of threatened species. Based on literature review, we refined the major threats to the threatened waterbird species in China.

We propose recommendations for waterbird conservation, including (1) strengthening conservation of nature wetlands and restoration of degraded wetlands, (2) enhancing public awareness on waterbird conservation, (3) improving the enforcement of Wildlife Protection Law and cracking down on illegal hunting, (4) carrying out long-term waterbird surveys to clarify population dynamics, (5) restoring populations of highly-threatened species through artificial intervention, and (6) promoting international and regional exchanges and cooperation to share information in waterbirds and their conservation.

A total of 38 species (14.6% of the total) have been listed as threatened species, including 6 species (2.4%) being listed as Critically Endangered, 16 species (6.4%) Endangered, and 16 species Vulnerable (6.4%). Another 27 species (10.8%) were listed as Near Threatened (Table 2). In addition, 54 species (21.5%) were not assessed due to data deficiency or their marginal distribution in China. The threatened species were mainly in the Orders of Gruiformes (10 species), Charadriiformes (10 species), Anseriformes (8 species), and Pelecaniformes (8 species). The highest proportion of threatened species was in the Order of Ciconiiformes (40.0%) (Table 3). Although the percentage of threatened waterbird species in China (15.1% of the total) was slightly lower than that the global level (18.8%) (Wetland International 2012), the percentage of non-assessed species in China (21.5%) was much higher than that globally (0.4%). Thanks to steps taken by A.P. forest department and changing weather conditions, many species that had abandoned the region are back

Chances are that your casual photo shoot along the Srivari Mettu (the old route by steps from Tirupati to Tirumala) in Andhra Pradesh will capture some avian species that went missing a few years ago.

The birds are back due to the improved ecosystem, say ornithologists and officials of the forest department. They claim that protective measures and changing weather have brought back the birds which abandoned the forest, along with new ones from distant Western Ghats.

Black-hooded Oriole ( Oriolus xanthornus which belongs to the corvidae family), a common resident bird of Seshachalam forest in the Eastern Ghats, went missing over three years ago. But a few of them were captured in a bunch of photographs by The Hindu along the route to Tirumala.

Besides India, the Black-hooded Oriole is seen in Srilanka and Indonesia. The Oriole, along with other species such as Golden Oriole, Black-naped Monarch and Indian Nightjar, had gone away from the region about three years ago due to increased red sanders felling and smuggling, and hostile weather conditions, according to Tirupati-based ornithologist, Karthik Sai.

“Many avian species disappeared a few years ago due to increased human activity, smuggling and fast changing weather conditions in the reserve forest. But, of late, we have seen the birds coming back due to favourable weather and ecological conditions. To our surprise, we see a bunch of Brahminy kites ( Haliastur indus, called Tella Garuda Pakshi in Telugu) in the Kalyani Dam area. This species is specific to the Western Ghats but has been sighted here, perhaps due to the improving habitat,” Mr. Karthik said.

The efforts by the Forest Department in conserving the environment are yielding results, claimed the Deputy Conservator of Forests and Special Task Force for Red Sanders Protection, B.N.N. Murthy. “There has been a lot of improvement in wildlife management and conservation here. We are restoring more water bodies and ensuring the availability of food as part of our efforts. Several ground-nesting birds are protected through fire-lines (fire barriers to prevent forest fires), water holes and pits,” Mr. Murthy said.

Besides disturbance due to red sanders smuggling, many species, especially the ground-nesters, were threatened by people who consumed them, causing their mass migration or near-extinction, he said.

According to a research paper submitted in 2014 by the Bio Lab of Seshachalam Hills, Sri Venkateswara University and Forests, Wildlife Management Circle, Tirupati, Seshachalam forest is home to 215 species of birds, which belong to 45 families.

Some of the avian species such as Emerald Dove and Painted Spurfowl — described as “uncommon” by the researchers — are now frequently sighted along the old Tirumala steps route according to the locals. This apart, the beautiful Indian giant squirrel ( Ratufa indica ) is also a common sight on the other side of the forest in Tirumala.

The Seshachalam forest, one of the richest regions in terms of biodiversity, could have received much more protection and care but for the paucity of funds and lack of financial support. The funding for the entire region is approximately in the tune of Rs. 50 crore which is negligible according to a top forest department official.

“The Western Ghats alone get about Rs. 1,000 crore compared to the Rs. 200 crore overall budget for the protection of forests in our State (Andhra Pradesh). We need at least Rs. 500 crore for the protection of the Seshachalam forest. The Tirumala Tirupati Devasthanams, the State and the Central governments should focus more on this rare biosphere,” said the official.

It has been another busy year for the Albatross Task Force, and our teams have made good progress in reducing the bycatch of vulnerable seabirds in some of the world’s most deadly fisheries

Albatrosses are one of the most threatened groups of birds in the world, with 15 of 22 species currently at risk of extinction. One of the major causes of their decline is being caught accidentally as bycatch on baited longline hooks or struck by trawl cables and dragged under the water.

Horrifyingly it’s estimated that around 100,000 albatross die every year in longline and trawl fisheries around the globe. For birds that are long-lived yet slow to breed, these deaths have lead to huge population declines with some colonies having halved in size since the 1990’s.

To combat these needless deaths the Albatross Task Force was set up in 2006 to find solutions to this problem, and work with fisheries and governments to save the albatross. Over the last 12 months the team has made good progress towards saving vulnerable seabirds in some of the world’s most deadly fisheries, the details of which are in our new report.

8/10 of our high priority fisheries now have regulations in place to protect seabirds, following an announcement from Argentina that seabird regulations are to be introduced by May 2018 that will require trawlers to use bird-scaring lines.

The benefit for seabirds in Argentina will be huge, as the main trawl fleet is responsible for the death of 13,500 black-browed albatross per year, an impact we expect to reduce by over 85% based on our experimental results.

Across the Atlantic in Namibia, since seabird regulations came into force there, 100% of trawl and demersal longline vessels have now been provisioned with bird-scaring lines, constructed through our collaboration with a local women’s group, Meme Itumbapo.

By next year we hope to show that Namibia has achieved significant bycatch reductions similar to South Africa where we documented a 99% reduction in albatross deaths in the trawl fishery following the introduction of bird-scaring lines. This will be a major win for albatross, as our estimates for the two Namibian fleets suggest in excess of 25,000 seabirds were previously killed annually.

Our work in small scale fisheries has also leapt forward over the last 12 months; in Chile we have shown that modifications to purse-seine net design has the potential to reduce shearwater bycatch massively, and in Peru trials of net lights have virtually eliminated bycatch of not just seabirds, but also turtles and marine mammals.

This is all hugely exciting as no mitigation measures previously existed for these types of fisheries.

All of these successes have only been possible due to the collaborative efforts between our in country partners, the RSPB and BirdLife International, plus generous funding from RSPB membership, external sponsors and many kind individual donations.

We are extremely thankful for the continued support we receive, without which we wouldn’t be able to keep up the fight to save the albatross. 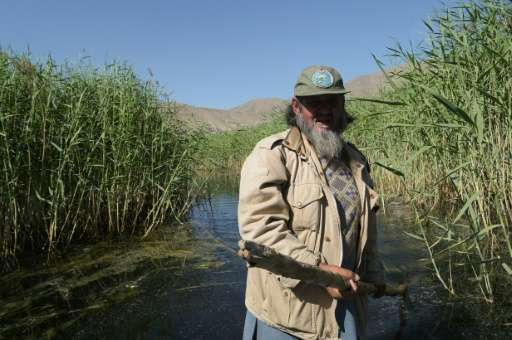 A rare Afghan marsh that was once a royal hunting ground is set to come under the official protection of the UN environment agency, with the aim of saving hundreds of migratory bird species.

On the long, arid journey to the Caucasus and Siberia, across the Hindu Kush massif, the Kol-e-Hashmat Khan wetlands outside Kabul provide sanctuary for the thousands of storks, egrets, pelicans and flamingos that head north every spring from southern India.

But after 40 years of conflict and neglect, their habitat is being threatened by the growth in new homes, irrigation systems, rubbish and global warming which is gradually changing the local environment.

Now the UN has designated the wetlands a conservation site, the Afghan government said on Sunday, as it also looks to help preserve the water supply of the capital.

“There are probably more than 300 or 400 species that pass through, though without an accurate count it is hard to be sure,” says Andrew Scanlon, head of the United Nations Environment Programme (UNEP) in Afghanistan.

They are migratory birds and “tourists” who stay for a very short period of time to find food, he adds.

At daybreak, the marsh comes alive with the morning chatter of the birds hungry for breakfast.

Binoculars in hand, Scanlon stands atop a tower that dominates the landscape.

In the distance is the silhouette of Bala Hissar, an ancient fortress that defended the city for centuries. Opposite, mud houses and sturdier dwellings made from bricks seem to spring up at random, hurrily erected during wars for tides of refugees and displaced people.

It was once a favoured place for royals to go hunting, though Scanlon stresses any activity would have been carried out “in a sustainable way”.

But with the invasion of the Soviet army in 1979 and the succession of conflicts afterwards, including the civil war in the early 1990s, Afghans were preoccupied by their own survival and the environment suffered.