Feared Extinct, the Táchira Antpitta Has Been Found in Remote Andean Region

An international team of researchers has solved one of South America’s great bird mysteries. Working deep in the mountainous forests of western Venezuela, they have rediscovered the Táchira Antpitta, a plump brown bird species not seen since it was first recorded in the 1950s.

The 7.5-inch-long Táchira (TAH-chee-rah) Antpitta had not been spotted since 1955-56, when ornithologists first recorded and described it. The International Union for Conservation of Nature (IUCN) lists the species as Critically Endangered, and many feared it was lost for good.

Last year, scientists of the Red Siskin Initiative (RSI) — a conservation partnership between the Smithsonian and several scientific organizations in Venezuela — organized a team to go in search of the antpitta. The team was led by Jhonathan Miranda of RSI and Provita, and included colleagues Alejandro Nagy, Peter Bichier of the University of California at Santa Cruz, and Miguel Lentino and Miguel Matta of the Colección Ornitólogica Phelps (COP). American Bird Conservancy (ABC) provided financial support through a William Belton Conservation Fund grant as part of its ongoing Search for Lost Birds.

The team set out in June 2016, knowing that several factors were likely to make the antpitta especially challenging to find, if in fact it still existed. The species inhabits dense undergrowth at altitudes of 5,000 to 7,000 feet in a rugged and hard-to-reach region of the Andes. Difficult to identify visually, the bird differs in coloration in subtle ways from related species.

Antpittas are also easier to hear than to see. But without sound recordings, nobody knew what to listen for.

The researchers had an advantage: They knew where to look.  “We followed the route described in the earlier expedition’s field notebooks to locate the original site of the discovery,” Miranda said.

To reach the remote location, part of what is now El Tamá National Park, the team traveled by foot on steep and narrow Andean trails, with a mule train to carry their gear. From their campsite, the team hiked two hours in the dark to reach appropriate habitat at dawn, the best time to hear the birds sing.

The first day there, Miranda and Nagy detected the distinctive song of an antpitta they had not heard before. “We were thrilled to re-find the Táchira Antpitta during our first day in the field,” said Miranda, “and we think they persist in more places we have not yet searched.”

Over the next week, the team was able to confirm the mysterious song as that of the long-lost Táchira Antpitta, obtaining the first photographs and sound recordings ever made of the living bird.

“The rediscovery provides hope and inspiration that we still have a chance to conserve this species,” said Daniel Lebbin, ABC’s Vice President of International Programs. “We hope this rediscovery will lead to improved management of and attention for protected areas like El Tamá National Park.”

“El Tamá National Park is an important part of Venezuela’s natural heritage and recognized by the Alliance for Zero Extinction as a critical site to protect for the Táchira Antpitta and other biodiversity,” said Jon Paul Rodriguez of Instituto Venezolano de Investigaciones Científicas (IVIC, the Venezuelan Institute of Scientific Research), Provita, and the IUCN Species Survival Commission.

“Jhonathan Miranda and his RSI colleagues have resolved one of South America’s great bird mysteries, and we hope their findings will contribute to a renewed effort to conserve this species,” said Lebbin.

In the coming months, the team plans to publish the full details of their findings in a scientific journal, including how the Táchira Antpitta’s voice and visual characteristics distinguish it from other similar species. Additional field work is necessary to learn more about this mysterious bird. Similar habitat can be found nearby in Colombia, and the species might also occur there. Better knowledge of the species’ vocalizations and the visual identification gathered in this study will help researchers determine the species’ full range, ecology and habitat requirements, and how best to ensure its conservation.

“This species was originally described by William H. Phelps, Jr. of the COP and Alexander Wetmore, former Secretary of the Smithsonian Institution,” said Michael Braun of the RSI and the Smithsonian’s National Museum of Natural History. “It is fitting that the Red Siskin Initiative, in which COP and the Smithsonian are key collaborators, has been instrumental in the rediscovery. We invite those interested in helping us learn more about this species to join us.” 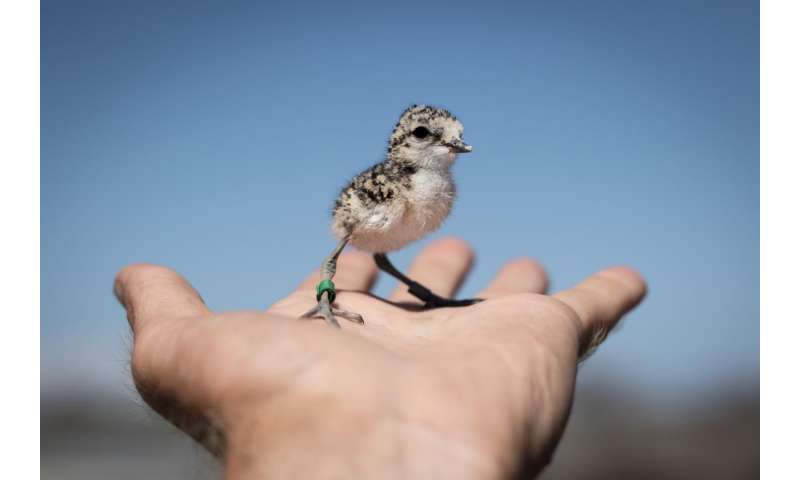 (Physorg 21 June 2017; Photo: Luke Eberhart-Phillips)
Extinction risk for some species could be drastically underestimated because most demographic models of animal populations only analyse the number and fertility of females, dismissing male data as ‘noise’.

An international team of researchers, including a PhD student and a professor from the Milner Centre for Evolution at the University of Bath, found that population growth in birds was very sensitive to the ratio of males to females in a population, called the adult sex ratio (ASR), which has previously been shown to affect mating behaviour.

The researchers have published their findings in the prestigious science journal, Proceedings of the National Academy of Sciences.

Species with a high number of males in a population tend to be polygamous: the females typically breed with several partners in one season, leaving the males to do most of the care for their offspring. However, with a large number of males competing for fewer females, a male biased population can also lead to increased aggression and harassment of females which can reduce survival rates.

Conversely, species with a higher number of females to males have lower parental investment by fathers which can also adversely affect survival of offspring. Where numbers of each sex were evenly balanced, parents cooperated more in care of their young and breeding pairs tended to be monogamous.

The researchers looked at why an unbalanced sex ratio should develop in some birds. They studied the survival and breeding behaviour of 1,259 wild Snowy Plovers in north-western Mexico over a seven year period, a species that is typically male biased. The team found that whilst a similar number of males and females hatched, males had higher survival rates at all stages of life, but particularly at the juvenile stage, when individuals are independent of their parents but not fully grown.

These findings could impact the conservation of endangered species, since ignoring the sex ratio of a population could miscalculate the survival rates and therefore underestimate the vulnerability of species to extinction.

Professor Tamás Székely, from the Milner Centre for Evolution at the University of Bath, said: “Our research has shown that population growth is very sensitive to changes in the survival of the limiting sex. A biased sex ratio either way can compromise population stability – too many males increases violence, whereas too many females leads to less cooperation between parents which reduces the survival of offspring.

“Current extinction models only take numbers of females into account – our research shows this approach could drastically underestimate extinction risk and states that males should also be part of the equation.”

Luke Eberhart-Phillips, PhD student at Bielefeld University (Germany) and first author of the paper, said: “Our research shows that in Snowy Plovers the population is male-biased due to sex differences in survival of young individuals, rather than at birth or during adulthood.

“Therefore, the evolution of different mating systems – whether polygamous or monogamous – could be a consequence of innate sex differences in survival. In mammals, population sex ratios are typically female biased, whereas in birds, these sex ratios are usually male biased. “Based on our results, one could speculate that sex differences in survival during early life are driving these large-scale patterns and the evolution of breeding behaviours.”