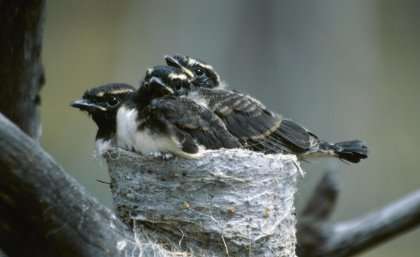 Removing introduced predators might not provide greater protection of nesting birds in Australia’s temperate forests and woodlands, according to a new University of Queensland study.

UQ School of Biological Sciences researcher Graham Fulton’s review of 300 scientific papers on nest predation has found that getting rid of medium-sized predators might actually increase attacks from smaller predators.

“In Australia, the introduction of foxes and cats, along with the reduction in dingo numbers is thought to have adversely impacted a range of smaller animals,” he said.

In turn, controlling cat numbers could empower smaller predators such as black rats or mice.

“But it’s not only predators which are to blame, humans are too,” he said.

“Birds such as currawongs, grey butcherbirds, Australian magpies and crows have increased their range and numbers as a result of the clearing of forest and woodlands.

“These same birds are known predators of nestlings and eggs.”

He said more research was needed to improve the understanding of interactions between birds, their predators, and their habitats.

The study is published in Pacific Conservation Biology

Probing its beak into the soft mud, looking for seeds or insects, the Seaside Sparrow is a common sight on the southeastern coasts of the United States.

Biologist Elizabeth Hunter started studying the small birds as a part of her dissertation at the University of Georgia. She wanted to know how sea level rise—which is already happening in Georgia at a rate of 3 mm/year—would threaten the sparrows. Then, she noticed something surprising.

“Over three years of collecting field data on Seaside Sparrow nesting success, I noticed that many more nests were being eaten by predators than being flooded by high tides,” Hunter said in an e-mail to Popular Science.

Not wanting to overlook an important threat to the population, Hunter, now at the University of Nevada, Reno, decided to create a mathematical model that would take both predation and sea-level rise into account. She found that while flooded nests were a threat to Seaside Sparrows, they were far more likely to build their nests lower in shrubs where predators were less likely to reach them, even if that meant their nest might get flooded more often.

Hunter says that sea level rise has made the risk of Seaside Sparrow nests flooding five to ten times more likely now than in the 1980’s. When a nest floods while empty, or when a few eggs are tucked inside, the flooding is generally manageable. So long as the eggs don’t float away, the sparrows can rebuild.

“The danger is when the nest has nestlings. Nestlings stay in the nest for 10 days after they hatch until they fledge, and if the nests floods while they are still in it, they can drown,” Hunter said. “Adults themselves aren’t really affected by flooding, but they do have to expend more effort to make a new nest and care for eggs and hatchlings if a nest is lost.”

In addition to the threat of the rising sea, the sparrows face assaults from the sky and the land. Fish crows, grackles, red-winged blackbirds, and marsh wrens attack from above, while raccoons, mink, and marsh rice rats mount a ground assault.

During seasons when predator activity was high, the sparrows kept their nests low to the ground. When they lost a nest due to flooding, they built higher, but the predator pressure weighed heavier in their choices than the flooding experience. Caught between gnashing teeth and the deep blue sea, Hunter estimates that predators are about seven times more important than sea level rise in Seaside Sparrows choosing their nesting location. Her research was published today in The Condor: Ornithological Applications.

Luckily, even though Georgia is expected to get one meter (three feet) of sea level rise by 2100—further squeezing the seaside sparrow habitat—there is hope. Hunter says that there is a chance that if humans can lessen the predator impact by putting fencing or modified cages around nesting areas, they might be able to encourage sparrows to move to higher ground. The research could also help other wildlife management teams plan out a future that keeps other birds living high and dry. 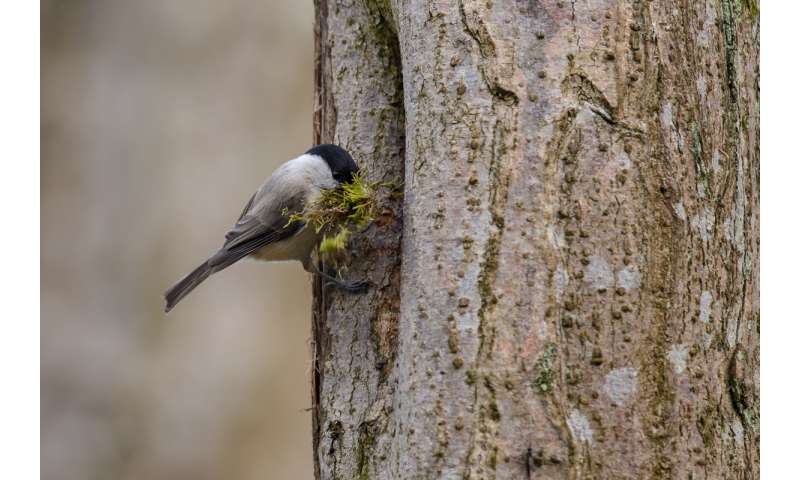 Nesting in cavities provides birds with some protection from predators—but it isn’t foolproof. A new study from The Auk: Ornithological Advances explores how Poland’s cavity-nesting Marsh Tits deal with predator attacks and finds that while tactics such as small entrances and solid walls do help, adaptations like this can only take the birds so far.

Wrocław University’s Tomasz Wesołowski has spent nearly thirty years monitoring Marsh Tit nest cavities in Poland’s Białowieża Forest, comparing nests that are destroyed with nests that are attacked but survive. He has found that a nest’s chance of survival depends on the predator’s technique—broods are least likely to survive (10%) when the predator manages to get into the cavity through the existing entrance, more likely (29%) when the predator uses its paws or beak to pluck out the nest contents, and most likely to survive (39%) when the predator tries to enlarge the opening or make a new one. Tits’ antipredator tactics vary in their effectiveness depending on the predator; attacks by Great Spotted Woodpeckers were successful only 60% of the time, while forest dormice were 100% successful.

The results show that despite the constant pressure of natural selection, Marsh Tits can only improve their antipredator tactics so much—there are limits to adaptation. Small, narrow entrances don’t work against small predators and are only effective when combined with cavity walls made of solid (not decomposing) wood; nests that were deep in a cavity, out of reach of the entrance, are safest, but birds seldom place their nests that way, suggesting that cavities that are too deep may cause other problems for Marsh Tit parents.

The Białowieża Forest, one of the last remaining tracts of old-growth forest in Europe, is an ideal place to study cavity-nesting birds, full of cavities of every size and shape for Marsh Tits to choose from. However, the fieldwork was not without its difficulties. “The Białowieża Forest still contains fragments of primeval origin,” says Wesołowski. “The work is challenging, as the old-growth stands are very tall. Marsh Tits breed at very low densities, and on average one has to search five to seven hectares of this forest to find a single breeding cavity. It requires much patience and determination.”

“To understand the evolution of nesting behaviors, many ornithologists attempt to quantify the trade-offs that birds face in warding off nest predators. Usually we do this by comparing nests that fail versus nests that succeed, but that approach is limited because we can’t tease apart the multiple factors, including chance, that contributed to making a nest successful,” according to Kristina Cockle of the National Scientific and Technical Research Council of Argentina (CONICET), an ornithologist not involved with the study who has worked extensively on nest cavities. “The new study by Wesołowski compares, instead, nests that were depredated to nests that were attacked but survived. With this approach, the author was able to identify the physical attributes of tree cavities that foiled a suite of nest attackers from woodpeckers to dormice.”