Whether co-habiting populations belong to the same species is only as tough as figuring out if they interbreed or produce fertile offspring. On the other hand, when populations are geographically separated, biologists often struggle to determine whether they represent different species or merely subspecies. To address the age-long issue, a British bird expert has developed a new universal mathematical formula for determining what is a species.

Nature is replete with examples of identifiable populations known from different continents, mountain ranges, islands or lowland regions. While, traditionally, many of these have been treated as subspecies of widely-ranging species, recent studies relying on molecular biology have shown that many former “subspecies” have in fact been isolated for millions of years, which is long enough for them to have evolved into separate species.

Being a controversial matter in taxonomy — the science of classification — the ability to tell apart different species from subspecies across faunal groups is crucial. Given limited resources for conservation, relevant authorities tend only to be concerned for threatened species, with their efforts rarely extending to subspecies.

Figuring out whether co-habiting populations belong to the same species is only as tough as testing if they can interbreed or produce fertile offspring. However, whenever distinct populations are geographically separated, it is often that taxonomists struggle to determine whether they represent different species or merely subspecies of a more widely ranging species.

British bird expert Thomas Donegan has dedicated much of his life to studying birds in South America, primarily Colombia. To address this age-long issue of “what is a species?,” he applied a variety of statistical tests, based on data derived from bird specimens and sound recordings, to measure differences across over 3000 pairwise comparisons of different variables between populations.

Having analyzed the outcomes of these tests, he developed a new universal formula for determining what can be considered as a species. His study is published in the open-access journal ZooKeys.

Essentially, the equation works by measuring differences for multiple variables between two non-co-occurring populations, and then juxtaposing them to the same results for two related populations which do occur together and evidently belong to different “good” species. If the non-co-occurring pair’s differences exceed those of the good species pair, then the former can be ranked as species. If not, they are subspecies of the same species instead.

The formula builds on existing good taxonomic practices and borrows from optimal aspects of previously proposed mathematical models proposed for assessing species in particular groups, but brought together into a single coherent structure and formula that can be applied to any taxonomic group. It is, however, presented as a benchmark rather than a hard test, to be used together with other data, such as analyses of molecular data.

Thomas hopes that his mathematical formula for species rank assessments will help eliminate some of the subjectivity, regional bias and lumper-splitter conflicts which currently pervade the discipline of taxonomy.

“If this new approach is used, then it should introduce more objectivity to taxonomic science and ultimately mean that limited conservation resources are addressed towards threatened populations which are truly distinct and most deserving of our concern,” he says.

The problem with ranking populations that do not co-occur together was first identified back in 1904. Since then, most approaches to addressing such issues have been subjective or arbitrary or rely heavily upon expert opinion or historical momentum, rather than any objectively defensible or consistent framework.

For example, the American Herring Gull and the European Herring Gull are lumped by some current taxonomic committees into the same species (Herring Gull), or are split into two species by other committees dealing with different regions, simply because relevant experts at those committees have taken different views on the issue.

“For tropical faunas, there are thousands of distinctive populations currently treated as subspecies and which are broadly ignored in conservation activities,” explains Thomas. “Yet, some of these may be of conservation concern. This new framework should help us better to identify and prioritize those situations.” 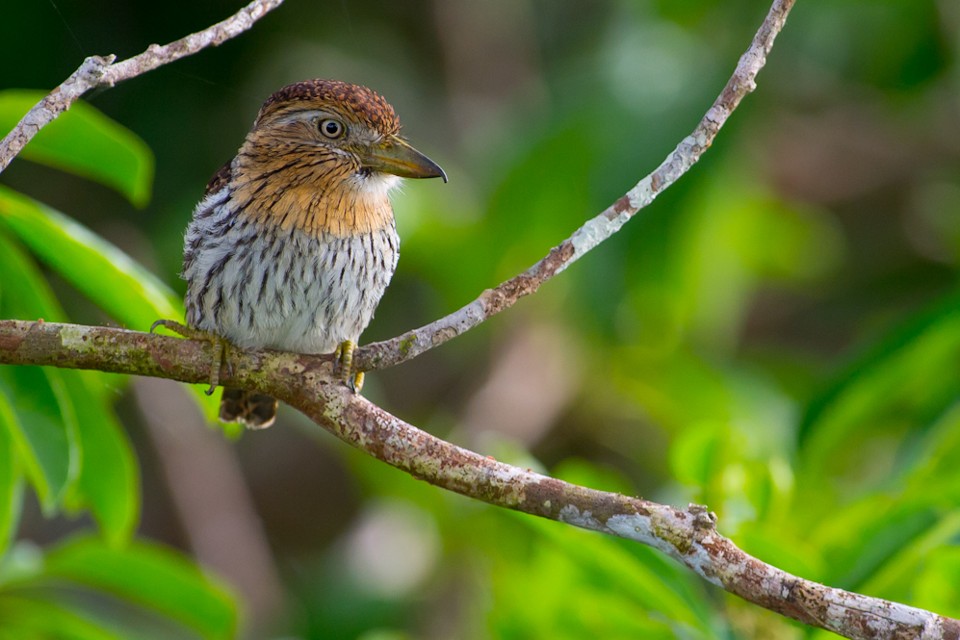 In July 2008, an American ornithologist named Bret Whitney was researching antbirds in the Brazilian Amazon when he heard a curious bird song. The sound, to his expert ear, clearly belonged a Striolated Puffbird––a big, streaky creature that looks like an owl crossed with a kingfisher. But it also had a smoother quality that struck him as “off-the-charts different” from the slightly warblier songs he knew from elsewhere in the region.

Whitney recorded the bird and collected a specimen of this strange-talking bird. Before long, he was conducting an in-depth review of the species across its entire pan-Amazonian range. He and some colleagues published the results in a 2013 paper that proposed dividing the Striolated Puffbird into three distinct species, based on subtle vocal, morphological, and genetic differences between populations.

In due course, the matter came before the American Ornithological Society’s South American Classification Committee, or SACC, which exists to standardize bird taxonomy on the continent and sanction changes based on new science. Here, Whitney’s puffbird proposal met with mixed results. After debating the nuances of his research, the SACC endorsed his recommendations only in part: They split the westernmost group off into a new species called Nystalus obamai, but left two other populations as subspecies of the original N. striolatus.

Failing to see the logic behind this decision, Whitney regards it as “just nuts.” But it’s not unusual for things to get messy in the world of avian taxonomy, which addresses a fundamentally impossible task: the scientific imperative to label and sort amid the ever-evolving reality of life on Earth. An ostrich is definitely not a bald eagle, nor is a Canada goose a mallard. But the closer you zoom, the fuzzier things get. Are the Striolated Puffbirds of the western Amazon who stutter at the start of their songs different enough from other Striolated Puffbirds to merit full species status? What is a species, exactly, and where do the lines between one and another lie?

“We’re just trying to make the best of a bad situation. That’s all taxonomy is,” says James “Van” Remsen, the SACC’s chairman. Of the various “species concepts” in taxonomy that attempt to answer these questions, the SACC relies most heavily on the “biological species concept,” which basically defines a species as a group of things that only breed with each other. “We’re trying to apply artificial barriers on a continuum,” Remsen acknowledges. “It’s all kind of silly. … The emotions that are involved in some of these decisions are really kind of out of proportion.”